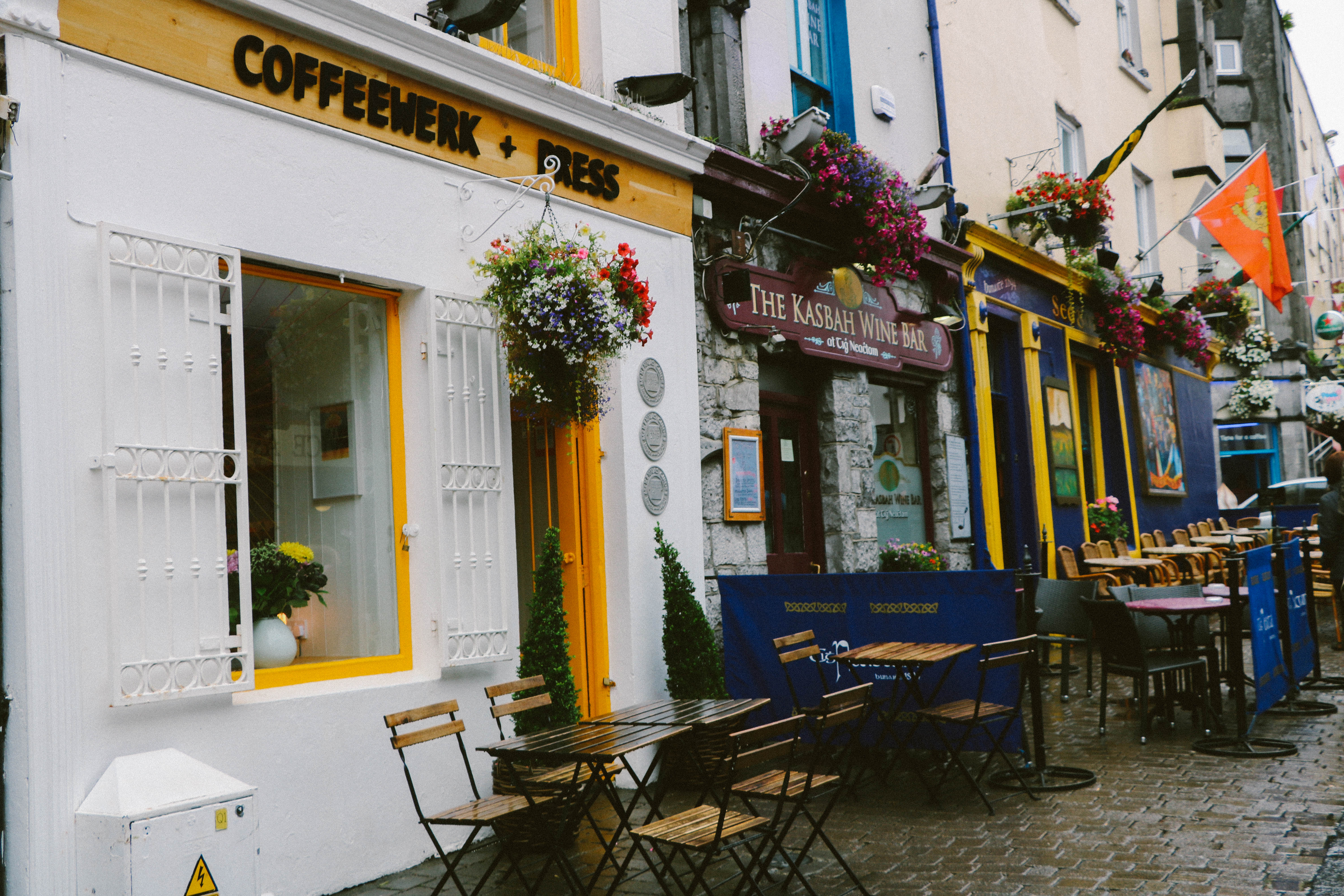 Natsuki and I thought we knew what was in store for us when we boarded our Wild Rover tour bus headed for the west coast of Ireland. As the itinerary clearly indicated, we would experience…

“The wild western edge of Ireland on a full-day outing to the coastal Cliffs of Moher. Tak(ing) in sweeping views of the Atlantic, learn(ing) about the fascinating, rocky geology of The Burren, and stop at the charming, historic villages  like Doolin and Kinvara…”

We were also scheduled to explore the “artsy, bohemian city of Galway, renowned for its brightly painted pubs, live music, and cafes.” Not a bad afternoon eh? Except no one told us, nor could we have planned for the storm hitting the west coast of Ireland the day of our tour. But there’s always a silver lining…we’ll get to that later.

I found the three and a half hour ride form Dublin to the Cliffs of Moher unexpectedly frustrating. Not for reasons you may be thinking. The roads were clear and the motor coach was comfortable. Our tour guide even covered about a thousand years worth of Irish history and taught us Gaelic all before we were three quarters of the way there.

The scenery of the Irish countryside is as gorgeous as everyone says it is. It’s a gentle landscape with sweeping hills colored every shade of green imaginable. Watching the hills roll by lulled me into such a relaxed state I gradually began to doze off…But I didn’t want to shut my eyes and miss out on all the beauty! Like a child fighting to stay awake until midnight to see Santa come down the chimney, I fought the sleepiness because I didn’t want to miss a single minute of magnificent scenery.

In fact, the weather on the drive and in western Ireland led to surprising discovery of a new type of cozy induced not by food, but by my surroundings. 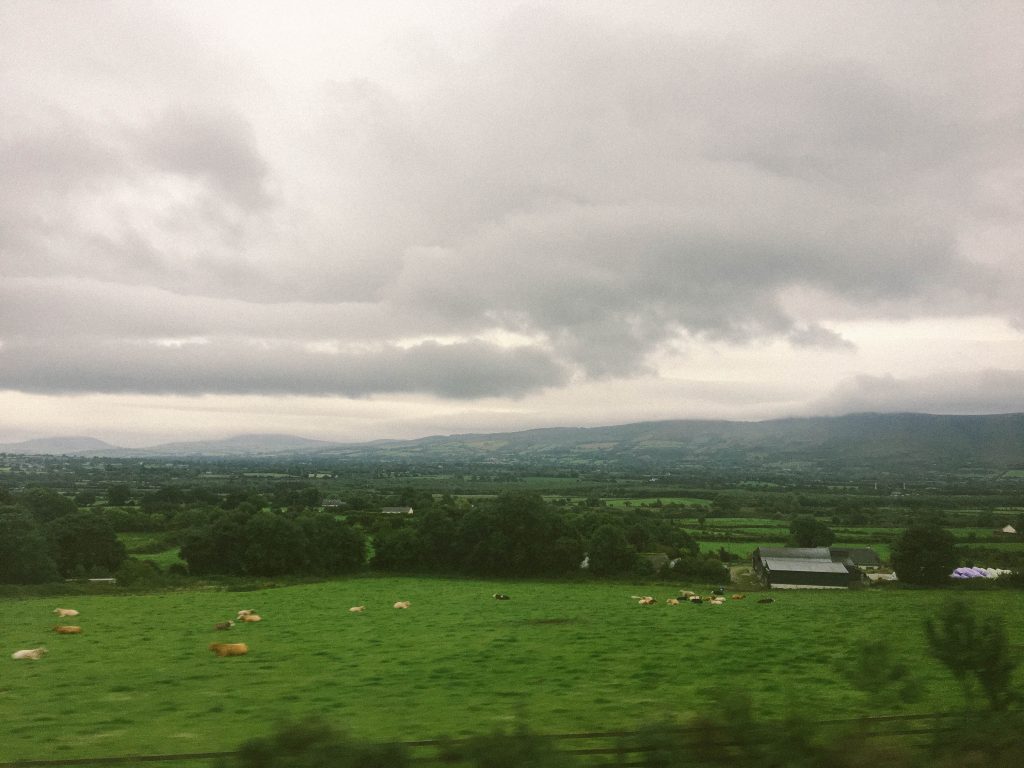 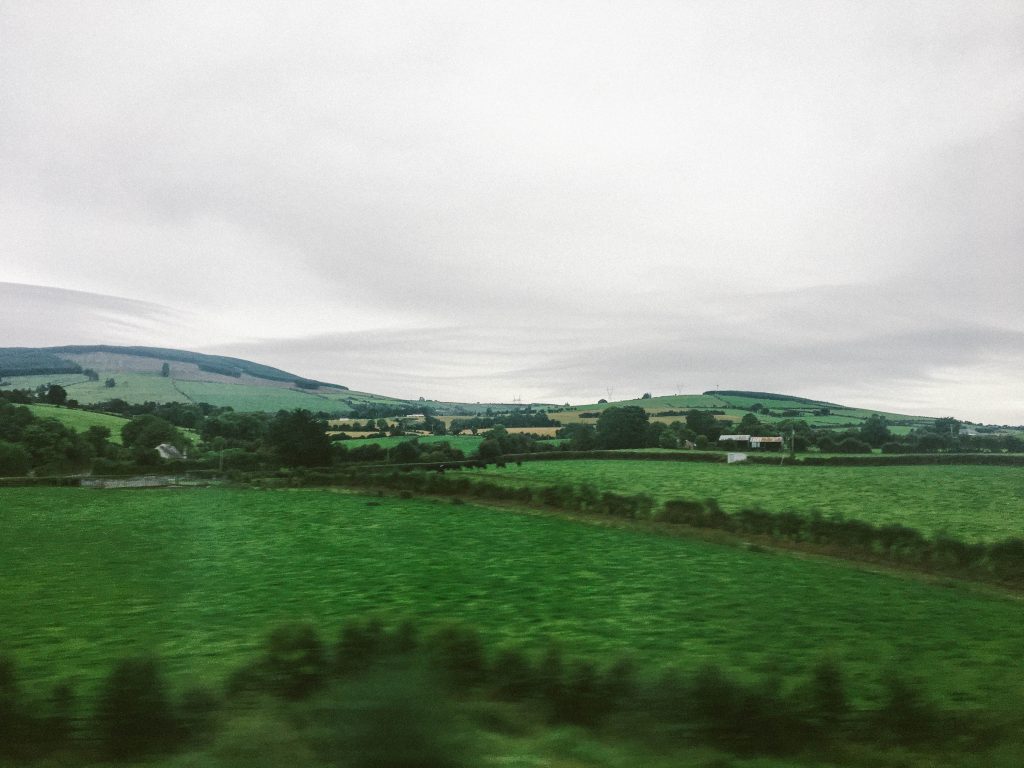 For any one who has been to Ireland or lives there, you know that the weather can be as temperamental as a two year old child who hasn’t had their afternoon nap yet. You have a very good chance of experiencing the weather of all four seasons in just one day. You also know that there is no such thing as “summer” in Ireland. The sun teases you as it peaks out in front of the clouds but it is certainly short lived once the clouds take center stage. Welcome to the Cliffs of Moher and the Atlantic Coast. 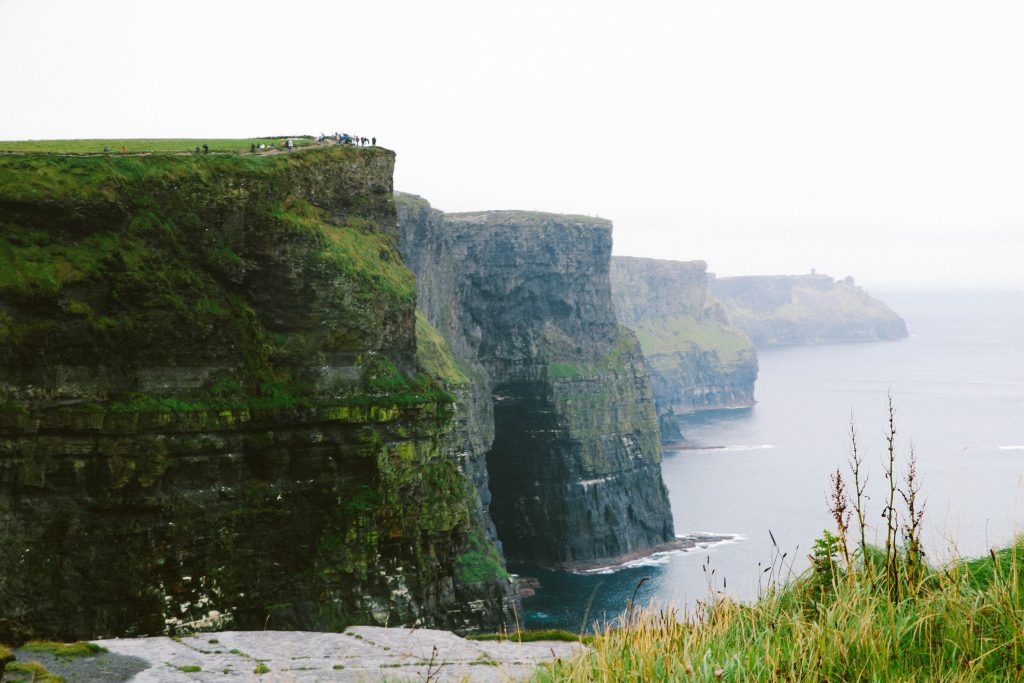 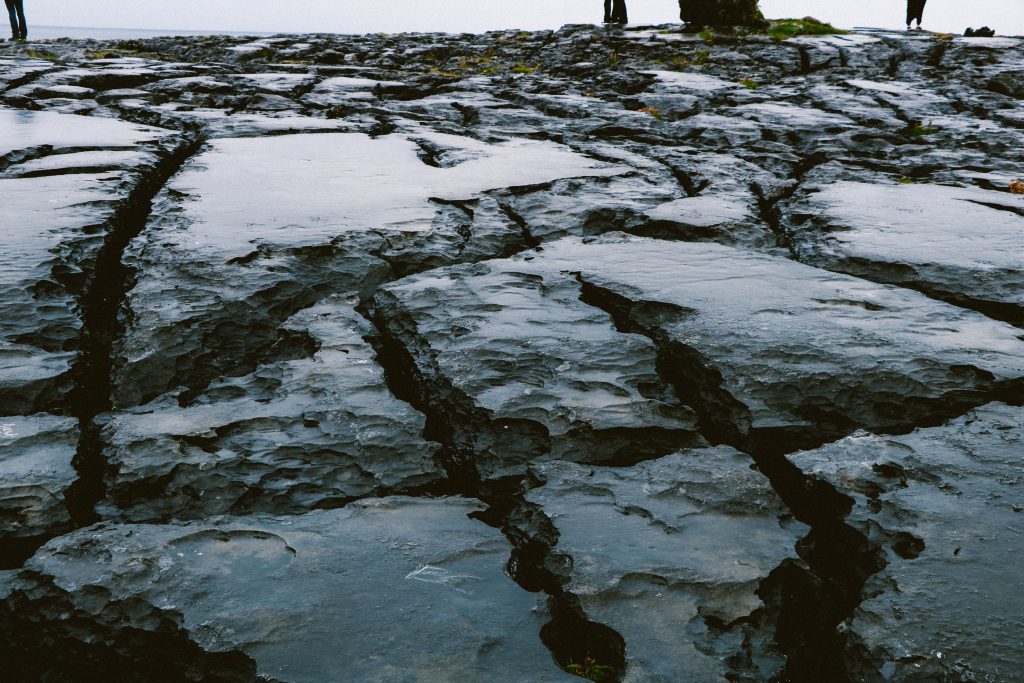 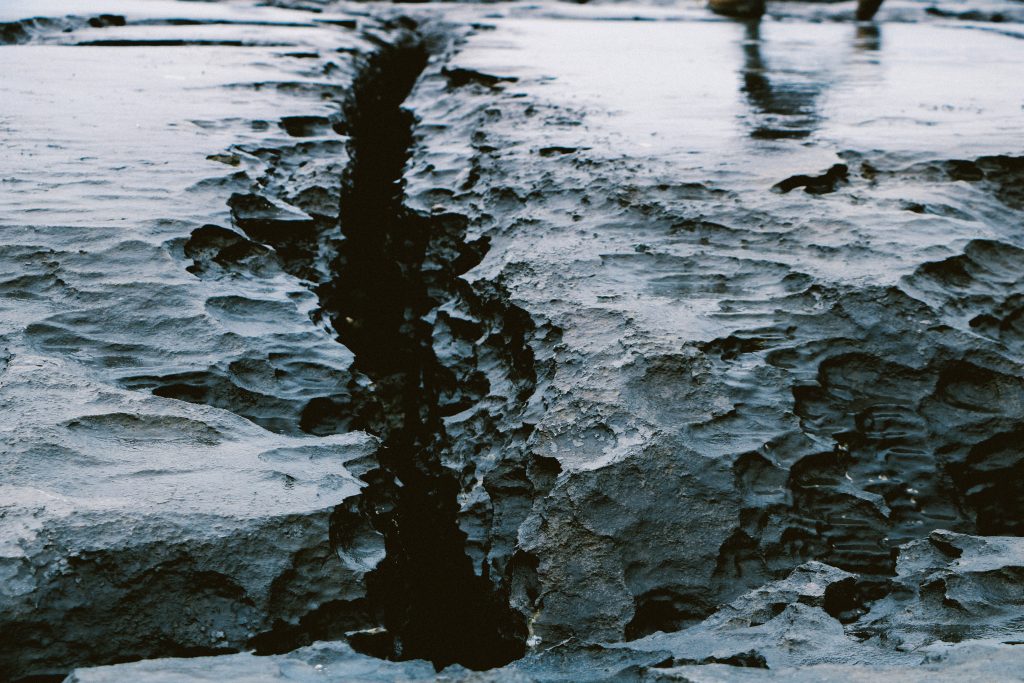 Witnessing nature’s power at the Cliffs of Moher and The Burren got me thinking about the intriguing dynamic of contrast. The colder, stormier, and more violent the elements were outside, the more snug and safe it felt inside. Whether there was comfort food present or not (or any food for that matter), the harsh natural conditions alone were enough to induce a state of coziness. I’ve discovered this to be the underlying concept behind physical comfort foods that we often associate with seasonal weather. But in Ireland where the climate is bleak most of the year, it’s no wonder there is no shortage of places to seek cozy shelter.

This was certainly true when we arrived at the coastal town of Galway. (Yes, the same Galway as Galway Girl. An original Irish folk song made famous to the rest of the world by everyone’s favorite red-head musician, Ed Sheeran.

Shops selling wool clothing and pubs airing the Gaelic games lined the streets of Galway. Since we arrived at an odd time around 4pm, many of the restaurants were closed for dinner preparations. Natsuki and I were in the mood for something quiet so we decided to forego the pubs and get meat pies instead. 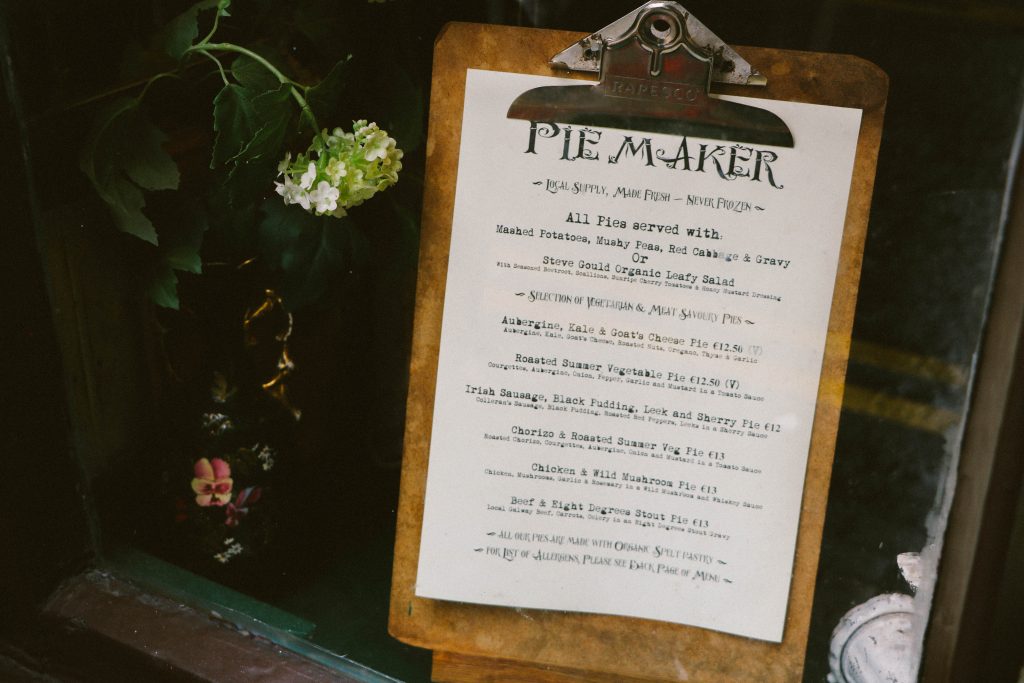 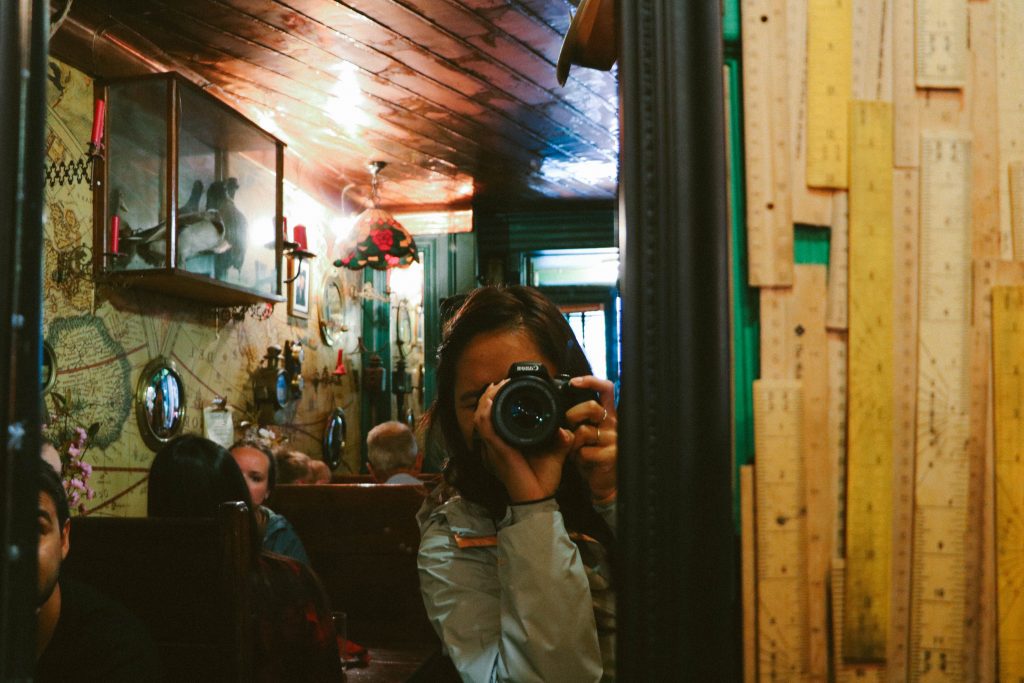 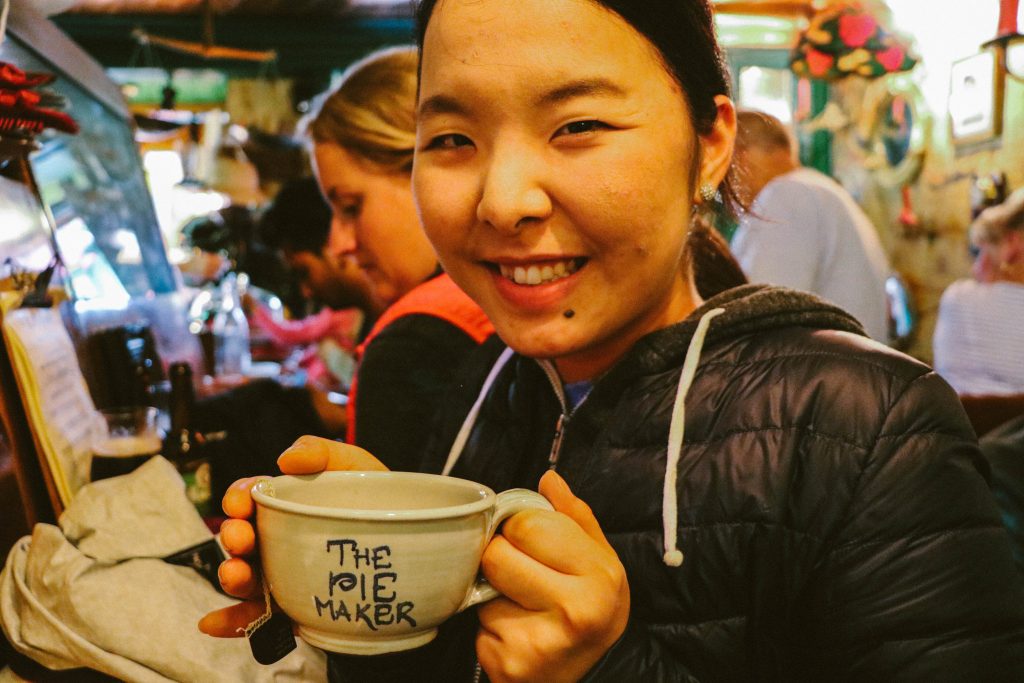 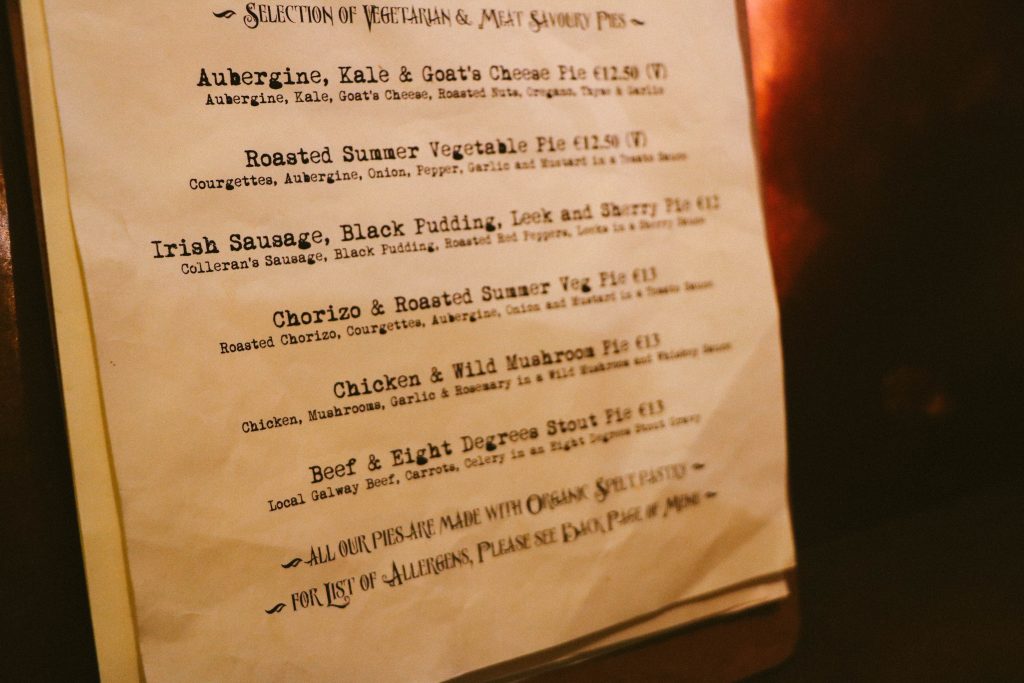 Without fail, the Pie Maker is yet another establishment to make it on the Coziest Restaurant list. It’s tiny, seating only about 15 people with very little elbow room. You really couldn’t theme the decor but somehow it all came together and created an eclectic vibe with all sorts of quirky pieces. Behind the counter was reminiscent of a butcher’s warehouse. They shop owners repurposed old chains and hooks to hang their signs and tools.

I tried a local ale and an Irish classic comfort food, stout pie. Guinness is typically the stout of choice for the pie, but the one I had used a stout from Eight Degrees Brewery in Cork. A perfectly flaky pie crust encased a deeply savory filling of melt in your mouth Galway steak and thick gravy. Not to mention it came with the classic mushy peas, mashed potatoes, and red cabbage. Don’t get me wrong, it was a ton of food, but there was very little need to actually chew anything since a lot of the food was mashed. I wondered if there was a method to this madness and everything was prepared this way so the diner could conserve their energy.

Relatively speaking, it wasn’t nearly cold outside, but I’d imagine a hearty meat pie is the ideal food to provide sustenance to face the elements. 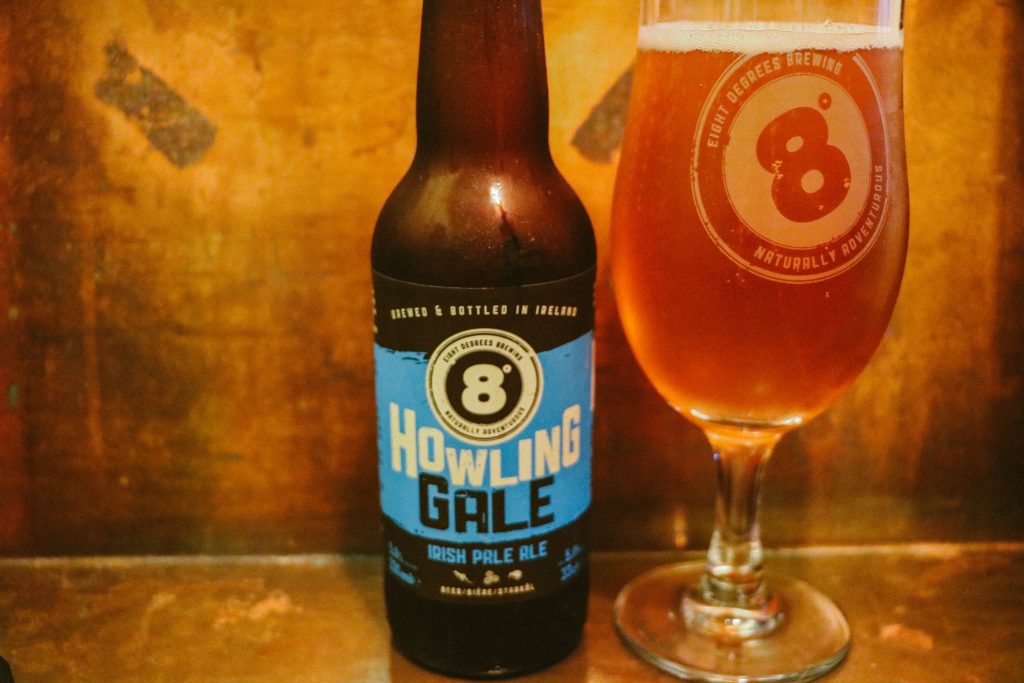 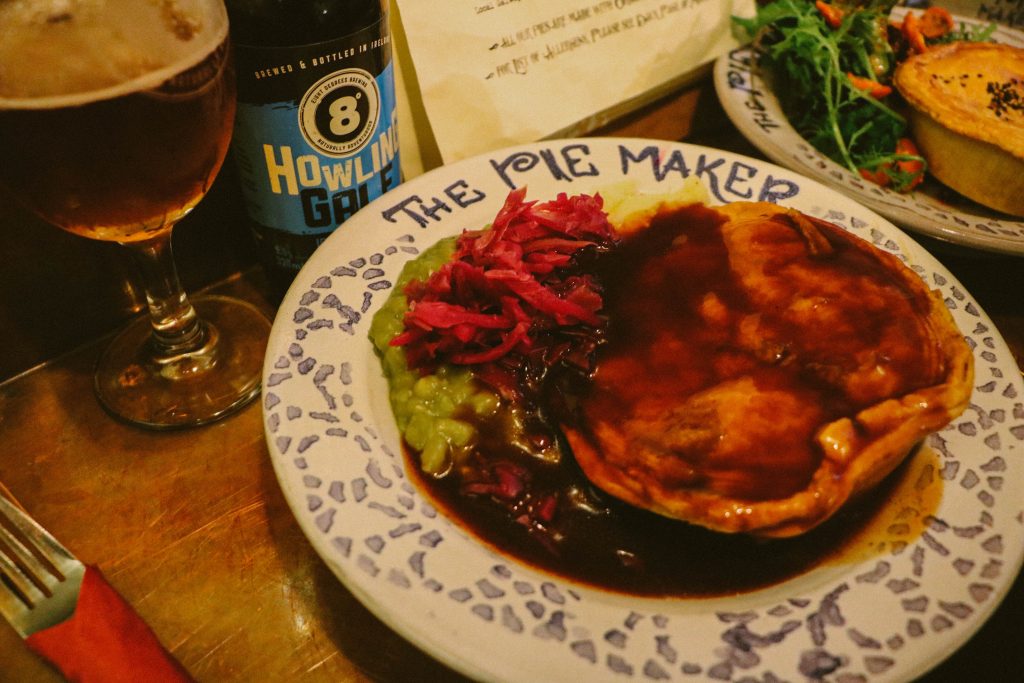 The return journey home wasn’t as scenic as the way we came, but that was the perfect amount of time to enjoy Irish cinema. Our tour guide popped Sing Street into the DVD player and off we were, headed back to Dublin. The film is set in Dublin in the eighties, and is about a teenage boy who rounds up a band all to call the attention of a beautiful young girl. Musically entertaining and nostalgic of teenage glory days, I would highly recommend giving this movie a go.

And yet again, we arrived back in Dublin with an appetite. We headed to a rather gaudy and flamboyant spot called The Bank on College Green. At first glance you think, well, a spot that bankers would dine at. giant pillars, high ceilings, and gold lined details flooded the walls and furniture. But a closer look reveals a lot more historical sustenance to the building.

The Bank Bar and Restaurant opened in May 2003 and is located on College Green in the heart of Dublin. The area has been occupied since the Viking times and is one of the oldest regions of the city. In the 17th and 18th centuries the are became even more central following the construction of Trinity College and later the Irish House of Parliament across the way on College Green.

“The exterior is Franco-Scottish in inspiration and is unique in that it is one of Dublin’s rare examples of Scottish sandstone. The interior, which was once the main banking hall, is a stunning example of merchant power and patronage displaying an extraordinary ornate setting, stained glass ceiling, mosaic tiled floors and spectacular hand carved plasterwork and cornicing. If you ramble downstairs to the nether regions you will find the vaults. Look at our Chatwood safes, now retained as a museum-type feature.”

I personally wouldn’t call it a pub, but The Bank was recently named the best pub for food in Dublin. They should probably be voted pub with the best drinks too!

I decided to order a whiskey cocktail because I couldn’t leave Dublin with out trying Irish whiskey. So I selected the only whiskey cocktail I know – an Old Fashioned – thinking all the decision making I had to do was to choose the whiskey. Teeling, that was easy. But then the waitress asked, “Would you like the smoked or classic?”

If your waiter ever gives you the chance to order your old fashion “smoked,” absolutely take them up on it. It will be worth every penny. After the bartender mixes your drink, he places under a hood atop a rack with a screen to allow the smoke from a lit wood chip rise. Your drink is then smothered in a fragrant hickory cloud and disappears like in a magic show. A few seconds later, the hood is lifted and voila!

Smooth and velvety, the smokiness isn’t over powering and it brings out the sweetness from the orange. A perfectly balanced cocktail I wished was bottomless. It’s quite a process and is a sight for the eyes, so be patient if you order one. Good things take time…

For the award winning food, I ordered a homemade seafood chowder with some Irish soda bread. And again, the food did not disappoint. The chowder was chunky with proper bite sized pieces of fish, clams, and other delectable crustaceans. Not too fishy and perfectly creamy. All keeping it down with a hearty piece of soda bread spread with Irish butter between each bite.

A warm and full belly topped off a very Irish day indeed.