Durham, You Had Me at “Why Aye Man” 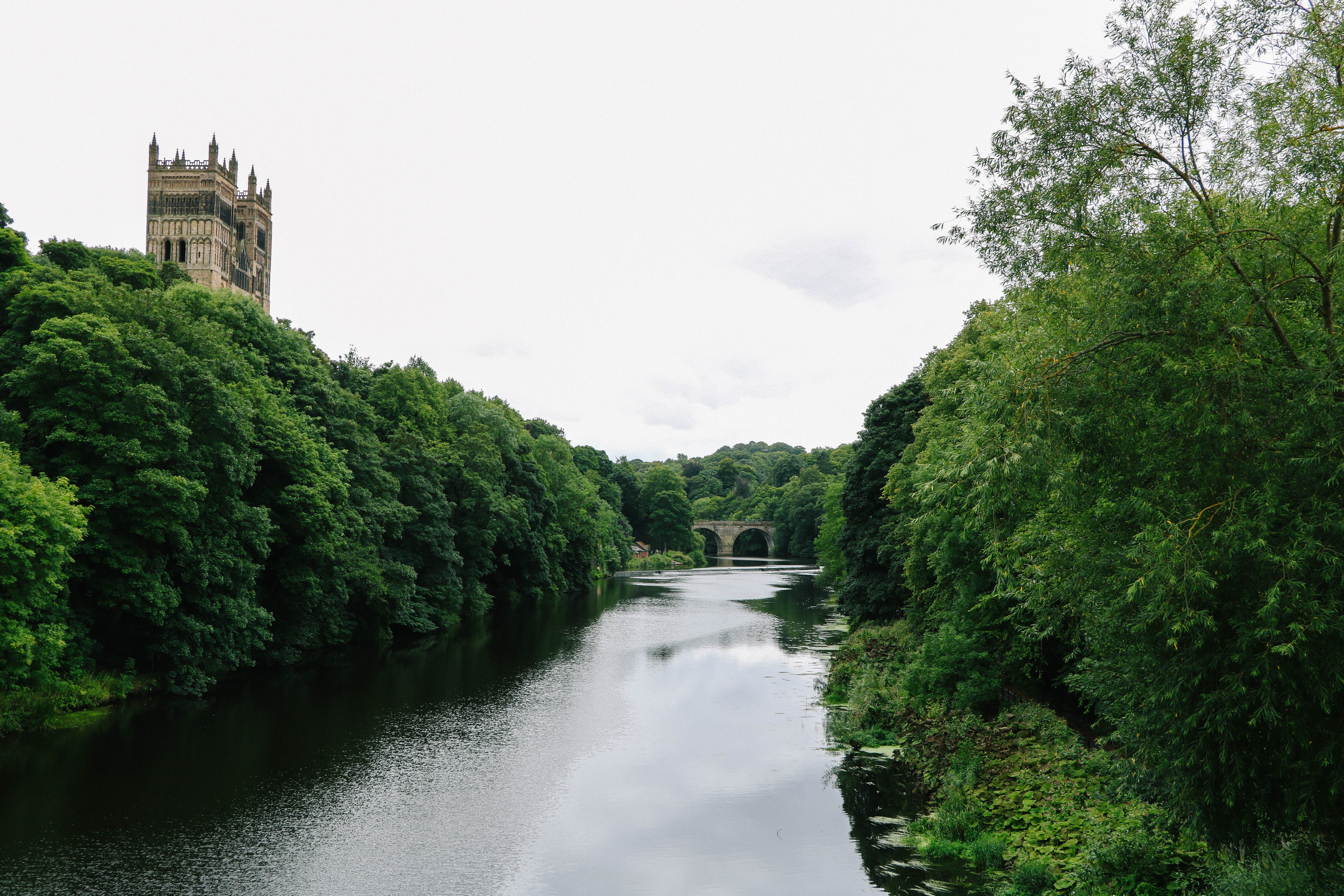 If all you seek in life is an experience so cozy that it will knock you off your feet, straight back into a reclined Lazyboy…then venture on up to Northeastern England. Whether traveling north to Edinburgh or headed south to York, think about the journey rather than the destination. And when the train arrives at a tiny little station in Northeastern England step off and have a look around.

Durham, a little town lesser known to most of the world outside of the U.K., is a town of significant history and the sweetest charm. It is home to a castle, a cathedral, Georgian houses, ancient bridges, and the River Wear.

How did I come across Durham if it’s usually left undetected by your average traveler? Just earlier this year in Seattle, I casually offered someone a lift home after hitting if off at an event at the local yoga studio. That someone turned out to be Emily Osborne, my now good friend who hails from County Durham. She’s since returned home and is rocking the yoga scene as a teacher and entrepreneur. After Emily heard I was traveling through the U.K., she generously offered for me to stay with her and her family, even before letting her parents know. And the rest is history.

So full disclosure, I did have a local showing me around town – a local who just so happens to share the same feelings towards food as I do. (So not to worry, there will be plenty of that to come.)

Now I just can’t stop thinking about this exceptionally homey town – and neither will you! Sit back, relax, and get ready for one heck of a cozy English experience.

Let’s start with the history bit of it all. Durham Cathedral remains the heart and soul of the city. The UNESCO World Heritage site was the first building erected in Durham over 1000 years ago. Monks from the island of Lindisfarne arrived in Durham carrying the remains of the notable Saint Cuthbert. They found that the hill on top of the peninsula provided a worthy resting place for their saint. Despite its vast history, those from a younger generation who actually do know of Durham Cathedral probably know it as the school of everyone’s favorite wizard, Harry Potter. But don’t go wandering here expecting to find a Harry Potter attraction. The officials and organizations responsible for Durham Cathedral and Castle have worked very hard to preserve the history and significance of the site, and rightfully so. She’s a beauty.

Just across the lawn from the cathedral, sits Durham Castle. It’s a Norman castle which was originally built in the 11th century to project the Norman king’s power in Northern England. Today, the castle is a part of the University of Durham as an accommodation for students, the college library, and other offices for university business. The town’s everyday connection and interactions with ancient history are simply astounding.

Now on to the food, because it’d just be silly of me assume learning all this history hasn’t worked up an appetite. Winding our way on cobbled streets between Georgian homes and colleges of Durham University, Emily guided me to a cafe tucked away in a tiny court yard of sorts.

A cafe I had no idea would forever set my bar for coziness unreasonably high.

Flat White Cafe was established by locals, Patrick and Peter. The two both extensively traveled the world following their education in Durham. Upon their return they were left wondering why their hometown lacked “high quality independent, barista-led café in the glut of tourist-facing cafes or high street chains.” The pair saved up some money and built on their barista training obtained in the coffee capital of the world of Australia and New Zealand. Thus, Flat White was born on a perfectly snowy Saturday in December of 2010. – Flat White Kitchen

You can find out more about why I’m completely infatuated with this café as it’s featured in the Coziest Restaurants series.

But for now, a picture is conveniently worth a thousand words…

Just when I thought it couldn’t get any cozier than Flat White, we returned home to Emily’s house just ten minutes from the city center. Now, unless you’re lucky enough to know this lovely human being and her family, you may have a harder time finding Durham as out-of-this-world cozy as I do; but it was too good a time not to share.

So here’s the bonus section of the piece if you seek even more coziness in your life. The kind of warm contentment that comes from being around family and a well nurtured home.

When I first arrived at Emily’s house I was welcomed with cuddly Labradors and doggy kisses, human hugs, a proper cup of tea and milk, and a moist blackberry cake fresh out of the AGA (in case you’re wondering what the heck an AGA is…) As my friend Emily put it, it was the full English treatment. I’ll have you know this was just the beginning.

Every morning I’d wake up and the very first thing to do was enjoy a beverage in the conservatory with Emily’s parents and pups – freshly ground coffee for an Americano or flat white, classic English tea and a dash of milk, or even elderflower apple juice. It’s quiet, it’s peaceful, it’s lush and green outside – and it just made me want to melt into the couch for a little cat nap…at 9am in the morning. Despite how far I was from my home in Maui, it was an unexpected but familiar feeling of relaxation.

And then we’d gather for breakfast. The English breakfast of eggs, bacon, beans, roasted tomatoes, and toast one day; bacon sandwiches and HP sauce another morning; and salmon, eggs, and toast for another. It was the finer details which seemed so special and out of the way to me that really did the trick, but they were nothing but ordinary for this family. Like the fact that the eggs were just picked up from the hens roaming in the backyard and the orange marmalade was homemade.

Every evening there sat in front of me on a ceramic plate, a hearty rustic meal that warmed me from the inside out, as the heat radiating from the AGA heated me from the outside in. Coconut chicken curry, an Osborne family favorite for one night and an epic Sunday Dinner the next.

Then there were the shenanigans that took place at the local pub. The gathering spot where no one is a stranger, and if you are it doesn’t last very long. What makes an English pub one of the coziest spots on earth are the people. No music, no fancy decorations. Just good beer and good people. All you need are time and people to give this place a quirky and intimate character you just can’t manufacture. The people who genuinely enjoy each others company, the ones that tell the stories and the ones that do the listening, the people who take each others yoga classes, travel together, the ones who bring back tiny snow globes to add to a growing collection, the people  have no idea whose gaudy fur coat hangs in the corner of the pub forever unclaimed, and the people who are just down right happy to see each other.

Emily’s dad treated us to half-pints, and while feeling brave and excited by the warm energy in the room I tasted two quintessential English pub treats: a single pickled egg and pork scratchings. Taking my first bite just after a friendly fella behind the bar greeted me with,

“WELCOME TO THE NORTH.” 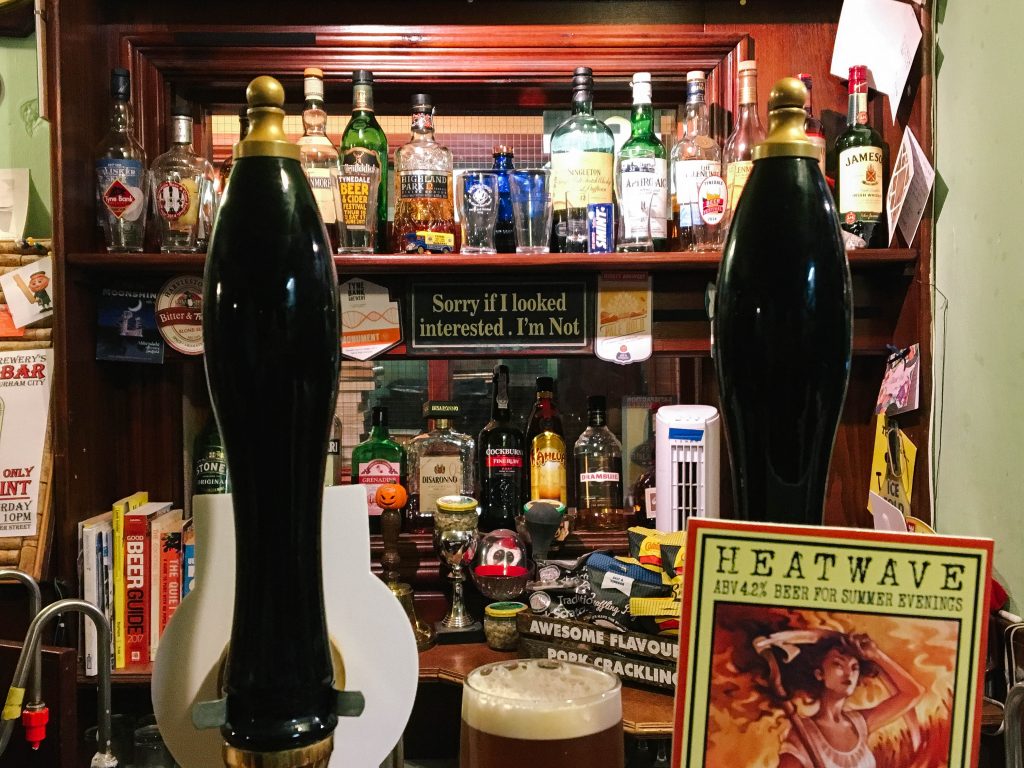 To help digest all of this (just writing about it all is making me full) we topped the evening meals off with a crispy nose clearing cup of peppermint tea before bed.

If it’s one thing I learned, is that the Osborne’s are my kind of family – the kind that likes, no, loves to eat and sure knows how.

Cheers, to my favorite English family,