York: Come for the History, but what about the Food?

As much as I didn’t want to leave my new beloved, Durham and Northern England, it was time for a scenic train ride south to York for a quick pit stop.

I’m going to be up front with you on this one, despite having read that Yorkshire can be a foodie’s wonderland I was slightly disappointed. I hadn’t found any outstanding cozy locals to dine at except for one coffee shop, The Perky Peacock, I visited before hopping on a tour to the North Yorkshire Moors.

With that, we’re just going to roll with the punches and this post will be filled with sights only. Not to worry, these sights can hold their own here. Vibrant natural landscapes and distinctive architecture are deeply rooted and rich in history, they will not disappoint. Maybe just come for the history, and not the food…

Once I arrived in York my first stop was the Cathedral and Metropolitical Church of Saint Peter in York…commonly known as York Minster. The York Minster is the larges of its kind in Northern Europe and is the seat of the Archbishop of York, the second highest office of the Church of England.

York as a whole, and particularly the minster, have a long standing tradition of creating beautiful stained glass. Some of the windows in the minster date back to the 12th century. Every direction you look in the minster humbling stained glass windows will fill your views from one peripheral to the other. The nave contains the West Window constructed in 1330 contains a heart shaped design colloquial known as the Heart of Yorkshire. Across the way is the Great East Window finished in 1408, and is the largest expanse of medieval stained glass in the world. To the North is the Five Sister Window, each lancet being over 52 feet tall. And lastly the south transept contains a rose window. 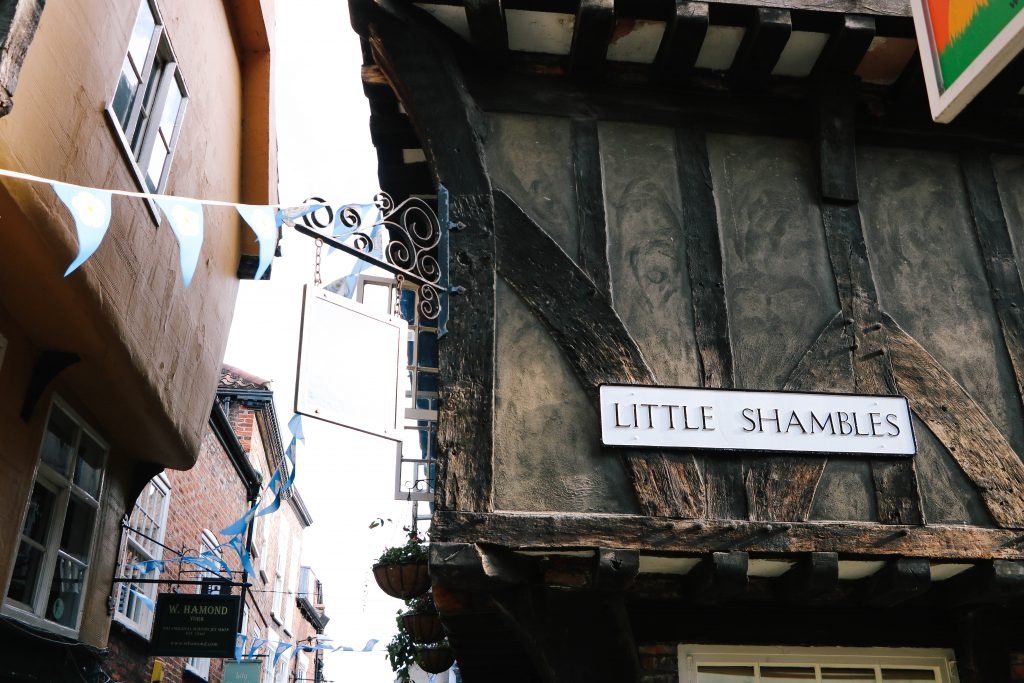 Soon after exploring the minster I took a time machine and wandered through 14th century streets known as The Shambles. A small street in the center of York is renowned for it’s medieval atmosphere. The buildings are quaint with black and white beams standing crooked and warped, lined with cobbled streets, teashops, and pubs.

Within central York, history is sitting just below your feet, every stone you step on, every building you sit in, and every wall you graze by has seen things modern man could only dream of seeing. One cannot visit York without walking the entire 2.1 miles of York’s historic medieval walls – the longest city walls in all of England. Walking these walls is like walking on a living timeline of the city. There are five main sections and there are sections where you can come off the walls and join at certain towers.

Spanning over 1,000 acres of picturesque landscaped flower gardens, man made lakes and ponds, scenic woodlands, and a “grand baroque façade” which appears more like a royal palace than a stately home, Castle Howard is one of England’s most spectacular estates.

Built in the 17th-century for Charles Howard, the 3rd Earl of Carlisle, much of the castle’s striking design was the work of architect John Vanbrugh and the stately home. It was the first of its kind to have a dome, hallways and ‘wings’. The domed cupola covered in gold and elaborate pilasters and frescos, took over 100 years to complete.

Today, the palatial home is open to the public either by self or guided tours of impressive interiors unveiling a trove of period décor, antique furnishings and  fine china. Some rooms are still utilized today by the Howard family and their guests. A significant highlight is the castle’s vast art collection, including paintings by Van Dyke, Rubens, Tintoretto, Canaletto and Reynolds; a portrait of Henry VIII; and an array of personal works by the 9th Earl of Carlisle. – Viator

Picturesque, tranquil, and invigorating, the North York Moors are a breath of fresh air. It is home to heather moorland, rich emerald pine forests, and rolling hills.

And then we venture further out of York to the North Yorkshire Moors – a National Park where history and nature combined reveals a vibrant landscape rich in heritage. Unlike National Parks in America, private citizens can own land in the moors, and have owned land in the moors for centuries. Although it often looks wild and empty, the heather moorland is not a natural environment. Every so often you’ll come across stone crosses and boundary markers that remind us of man’s influence on the land.

While driving through the moors we also made rest stops at the more than quaint towns of Helmsley, Pickering, Malton, and Goathland.

2 thoughts on “York: Come for the History, but what about the Food?”