Eating My Way Through Montmartre 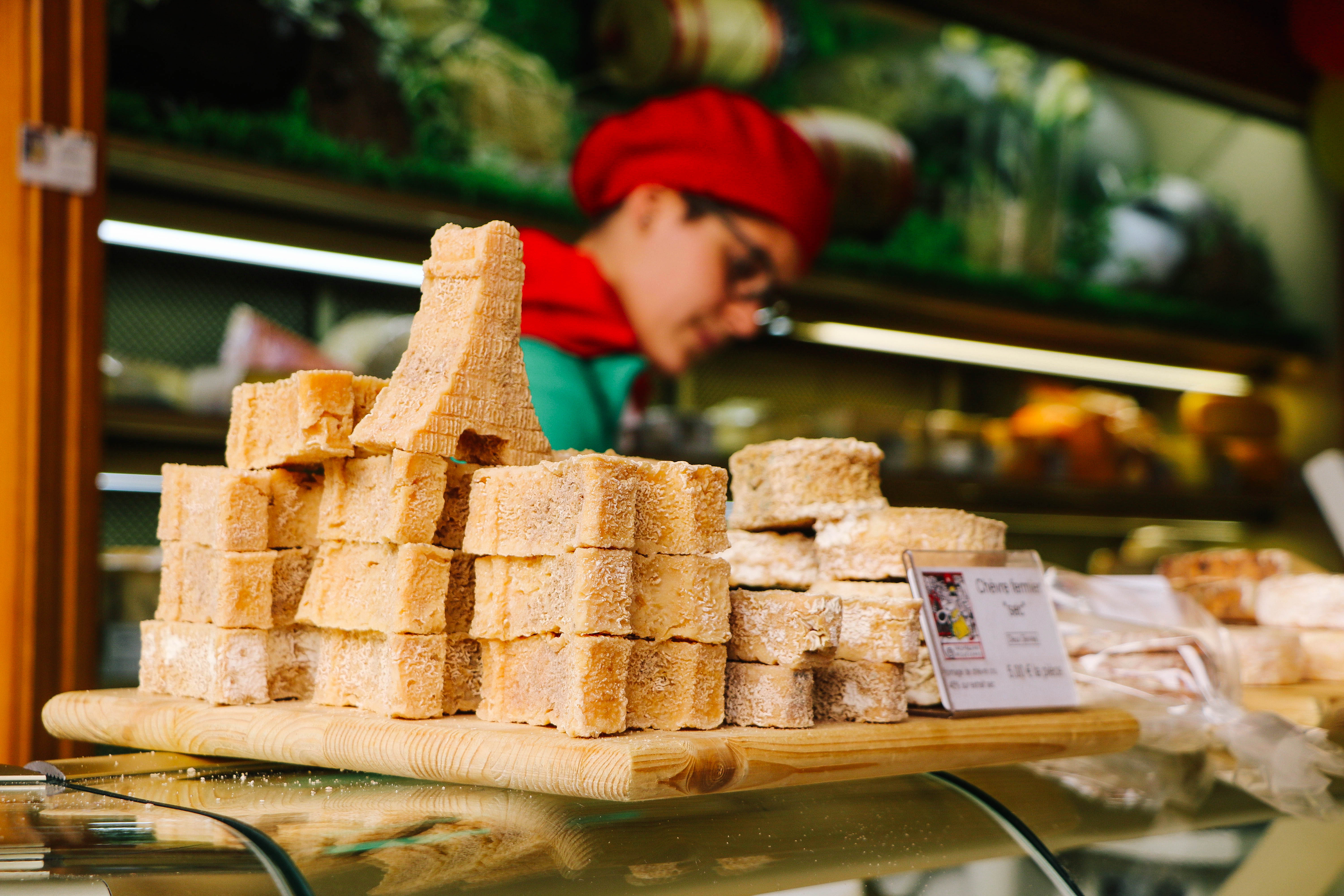 It’s quite amazing, before I began writing and exploring food and cozy experiences, my concept of “cozy” was perhaps one dimensional and strongly correlated with physical sensations and climate. But the more I travel, the more I learn that cozy can in fact be more than a cup of hot chocolate next to a smoldering fireplace. It can be a gentle and slow stroll through warm romantic streets, enjoying your time and life like there is absolutely no where else to be and no where to go. You can move at a pace so negligent and comfortable you notice the intricacies of life that so often pass us by. Or so I discovered this in Paris.

*Heavy sigh*  As if Paris wasn’t romantic and charming enough, I’ve managed to fall head over heals for a tiny hilltop neighborhood that crowns the city, situated in the heights to the north of the city center. Cobble stone paths wind through hilly streets, ivy hangs from curly iron awnings, and time just stands still in the heart of Montmartre.

Despite the throngs of tourists swarming the Palace Du Tertre, as a designated historical area, little development is allowed in Montmartre, allowing it to maintain its character and village-like charm. So long as you can get past the sleazy red-light establishments at the foot of Montmartre in Pigalle, you’ll find a slower and bohemian lifestyle upon this hill. Peer down narrow alleys, climb quiet stairways, adore ivy-clad houses, and watch the world go by in atmospheric cafes and bistros.

While famous for landmarks such as the Basiclica du Sacre-Coueur and Palace du Tertre, hidden among the streets are dozens of shops serving up tasty French treats – from award winning baguettes to crepes from a tiny stand easily missed to the untrained eye; and to the less cliche French cuisines such as Mousse de Canard and Jambon Persille.

With so much to offer, I would have easily been overwhelmed by all the options I had to choose from (if I could even read them since I speak zero French). So I did a little planning and decided to go on a “Secret Food Tour” through Montmartre.

If you like history and love food, this is by far this was the best way to get around town. Not only was our local tour guide, Simon, friendly and cordial as any tour guide should be, but I most appreciated his passion for sharing the history, stories, and painting a distinct character of Montmartre. All of which provided meaning and context to each of the locations we stopped by and food we tasted. 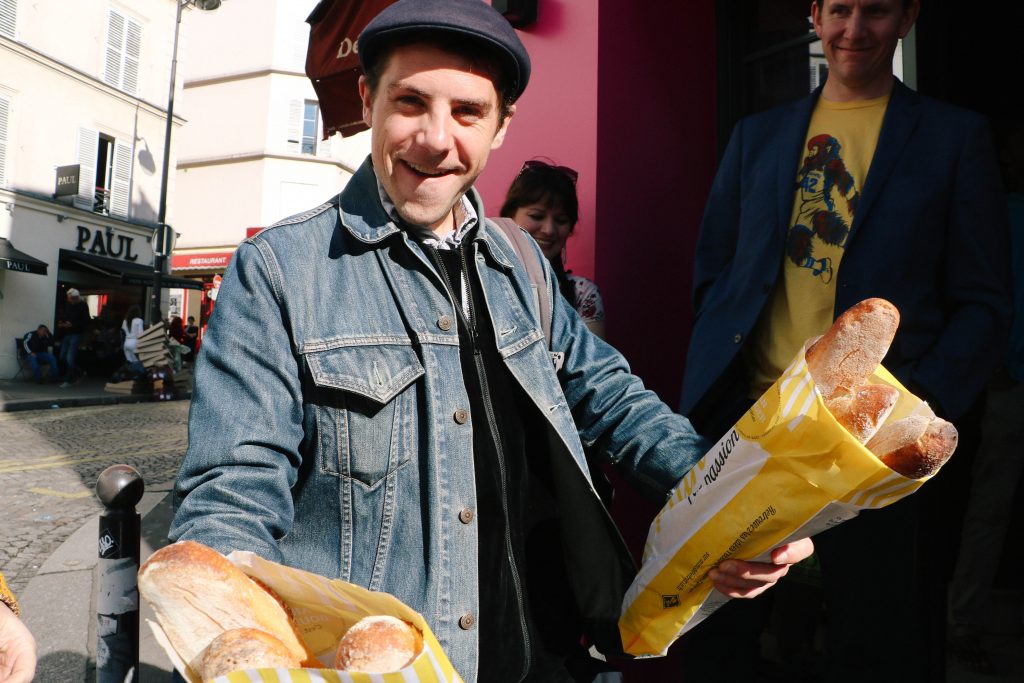 We started the day off by meeting at Abessess station and walked through quiet gardens and cinematic streets spotted with signature windmills. Our first stop was a chocolatier, Chocolat Illene, owned by a South Korean chocolatier who makes all of her creations on site. Modest and simple on the outside, you know you’re in the right spot when there’s no need for a shop to flash it’s colors. Chocolat Illene creates quality classic flavors of macaroni and truffles such as…, but also crafts signature and seasonal treats using unique flavors like fig, black sesame, yuzu, and plum.

Next, we were off winding down the streets to our next destination as the music of a street performance put a cherry on top making it feel like I was rom-com in Paris…minus the “rom.”

At our next stop we tried classic French crepes at Creperie Rue Joseph de Maistre. Can’t go wrong with the classic butter and sugar crepe!

And then it was on to the busy markets streets stopping by to try some cheese at Fromagerie Lepic, cured meats at La Boucherie des Gourmets Rue Lepic, and the best French baguettes in the country at Genest Boulangerie Rue Lepic. One thing to note is that French people know how to enjoy life, they take the time to fully enjoy their Sundays by shopping for ingredients at their local specialty stores to whip up a hearty meal for the family to enjoy, which is why you’ll also find that many smaller restaurants and stores are closed on Sundays.

Our tour then ended at the headquarters of The Secret Food Tour where we wined and dined on foods picked up by our tour guide along each of the stops. As each new food came out, we got a little explanation of what it was and where it came from, including:

From the meat shop:

Saucisson à l’Ail, a traditional semi-cured Northern Italian and French sausage made with red wine and a potent garlic bite

Jambon Persillé, a classic Burgundian specialty. A kind of terrine in which a puree or parsley leaves is suspended in a congealed jelly with chunks of rich salty ham

Confit d’oie, a rich and smokey spread of goose meat salted and seasoned with herbs and then slowly submerged and cooked in its own rendered fat.

From the cheese shop:

Cantal cheese, one of the oldest cheeses in France from the Cantal region in the Auvergne region. A semi-hard, uncooked pressed cheese whos flavors span the landscape from which it is born, depending on how long the cheese is aged – ranging from a hint of green pastures and aromas of butter and cream to a peppery spicy aroma of the Cantal cellars.

Timanoix cheese, produced by the Trappist monks at the Abbay Notre Dame de Timandeuc in the town of Brehan in Britanny. Timanoix is a semi-soft cows milk cheese that takes on the distinct flavor of a heavenly walnut liqueur and brine solution which the monks use to wash the cheeses after production.

Brique de Chèvre cendré, a goat cheese from the Limousin regiom of France, whose rind gets a dark black coat from the ash used to accelerate the drying of the cheese. This brick delivers the typical goat cheese flavors with a slight bitterness at the end.

Brillât Savarin with truffles, a soft white-crusted cow’s milk cheese triple cream brie. As if this cheese wasn’t rich, creamy and buttery enough for you, throw in delicate earthy layers of black truffles in between.

Comté, a cheese from eastern France, made from unpasteurized cow’s milk. The main aromatic flavors that will delicately linger and dance around your pallet are a balance of brown-butter and roasted-nut aromas with a sweet finish.

All accompanied with baguettes from the boulangerie, white, red, and bubbly wine.

But don’t be fooled by the photograph below! While it’s not so pretty, and doesn’t LOOK like anything special…surely these French treats did not disappoint. Sometimes moments in life are just too indulgent to be distracted by taking pretty photos…not even for the blog (the struggles of being a food blogger…)

By the end of the tour, I’d say my brain was filled with fascinating French culture and my tummy stuffed with delicious quintessential French food. An enjoyable and cozy time to say the least!

Merci beaucoup SFT and guide Simon for sharing a pleasant and tasty experience of Paris!

Filed Under: Travels
Tags: Baguettes, Cheese, Chocolate, Classic French, Cured Meats, Montmartre, Paris, Secret Food Tour, Wine
The Heart of Dutch Culture : It’s so cozy, we don’t even have a word for it in English
French Comfort Food Steeped in Tradition (and Wine)