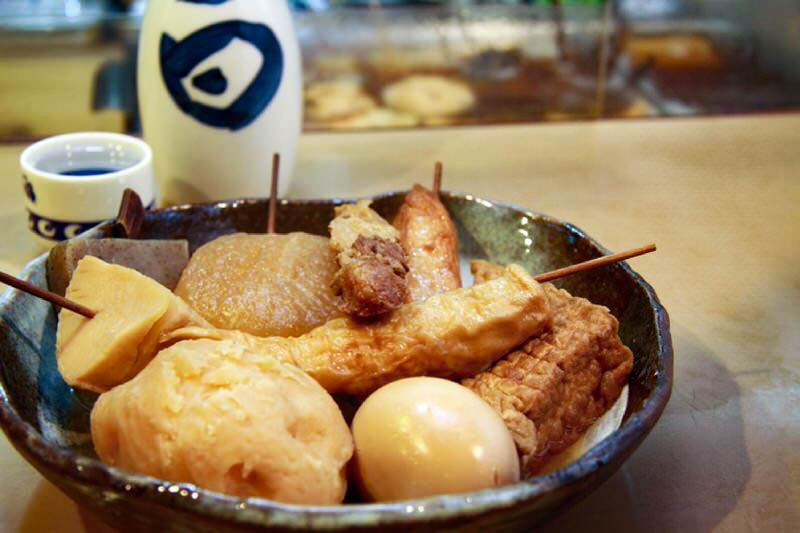 If you recall from my last piece about surviving in Tokyo, I gravitate towards foods and experiences rather unusual for a young woman. Rather than bottomless mimosas and puffy pancakes at a brunch spot exploding with lace doilies, I prefer a late night, ice cold beer in one hand and skewers of boiled beef tendon in the other, all while huddled in a more than tiny yatai (food stall).

Whether the food is on a skewer or not, there are many reasons I find eating at food stalls in Tokyo outrageously cozy. One of them is because the morsels prepared at these stalls are what I like to call Japanese Soul Food. The food here is physically comforting, it’s got history, it’s secretly a part of everyone’s fondest food memories, and it’s got well…soul.

But first of all, what is ‘soul food’?

According to our fellow epicureans at The Spruce, the term ‘soul food’ has roots in African American culture in the southern states of America. ‘Soul food’ refers to down-home cooking that uses ingredients that were readily available to people at the time.

That being said, there is a particular Japanese ‘soul food’ that has been keeping the people of this country warm every winter for centuries called, oden – a steamy assortment of chewy fish cakes and simmered vegetables soaking up a single pot of a clear, sweet, salty dashi (broth). You can find oden most commonly in your nearest conbini (Japanese convenience store) near the cash register during the winter months, or for those looking for a little more of an experience at a yatai or an oden restaurant all year around.

Oden fits into the category of nimono (simmered dishes) and nabemono (Japanese hot pot). The name originates from the Muromachi period in the 14th to 16th centuries, where the term became popular amongst the ladies serving the high court. A type of cooking originating in this period was called dengaku (tofu on skewers topped with miso paste), over time the term was shortened to den and the polite marker o- was added on, becoming oden. As time passed, shoyu (Japanese soy sauce) became desirable and the simmered version of dengaku was born out of popularity.

It wasn’t until the late Edo to early Meiji period (mid-late 19th century) that oden began to shape into the version we know today. Around this time, ingredients diversified with the rise of fish paste products. Another significant development came with the Great Kanto Earthquake of 1923, when people from the Kansai region arrived in Tokyo to aid the recovery efforts, bringing their own version of dashi (broth).  A food item served at soup kitchens due to its simplicity and easy-to-acquire ingredients. World War Two brought more migrants further diversified the ingredients and cooking methods. “Through this, oden became established as a cuisine in its own right, distinct from its dengaku origins.” – NHK World

Visually, oden is not like most Japanese cuisine, typically adorned with subtle precision and artfully symbolic display. Oden is undoubtably straight forward. It’s colors are best described as ’50 Shades of Brown’ (with the exception of an occasional muted red from a simmered tomato or yellow from a pale egg yolk).

Only those left undeterred by it’s humble appearance will know what oden can really do for the soul. This dish is symbolic of winter in Japan because the main event is the broth that heats your body from the outside in with every salty sip.

Depending on what region of Japan you’re in, the dashi can have a deep, dark, rich shoyu flavor, or it can be light and delicate. But no matter where you go, all oden shop owners take their craft very seriously and pour their heart into their broth. Dining at an oden shop with a broth at least 10 years old is quite ordinary. Each evening, the broth is carefully put in a large bowl and the stewing vat is cleaned. Once cleaned, the broth goes back in and new ingredients are added as needed to maintain the level of broth.

The oldest broth in Japan is 60 years old and served at a shop that is nearly a century old. This broth has survived devastation from deadly earthquakes, seen multiple Olympic games, dozens of Japanese prime ministers come and go, and an unimaginable advancement in technology and diversity. If that’s not enough soul for you, I don’t know what else is. (If I could have a conversation with any dish, it’d be this 60 year old broth…)

So what exactly is in oden? I keep mentioning fish cakes, broth, and vegetables, but I’m sure you want specifics about what you’re really getting into. For those of you new to oden, I’ll describe each of the spongey buoys you can expect to find bobbing around in those square copper pans.

Oden ingredients and broth vary greatly depending on the region and prefecture it comes from, but these ingredients (though not limited to) can be found in most oden in some way, shape, or form. Oh, and don’t forget about that tiny pea-sized dollop of karashi (Japanese mustard) to spice things up! You’ll often find it hanging out on the rim of your dish.

Some say, having oden without having a slice of daikon is like ordering a BLT without the bacon…you just don’t do it. Daikon (Japanese radish) has a much softer and milder flavor than it’s western cousin, and is the perfect vehicle for soaking up dashi. It looks heavy like a slice of potato, but it’s texture is quite the contrary – delicate and soft.

Yude-tamago are hard-boiled eggs that have simmered in the dashi for so long it has taken on its color and absorbed the flavors of the broth. Be careful though, these little guys are tricky to pick up if you’re not used to using chopsticks. One little slip, and splash it goes back into your bowl!

Kombu is an ingredient used in some way shape or form in nearly all Japanese cuisine that involves a broth. In the case of oden, the kombu is tied into little edible knots and is also used in the broth.

Konyaku is featured in many other Japanese dishes in various shapes and sizes. Made of a root plant called konjac, it is extremely healthy, but also extremely tasteless on its own. However, when tossed in a vat of dashi, the firm, jelly like konyaku turns into the perfect flavor sponge.

Shirataki (Noodles made from konjac)

A squid with way too many arms or an alien creature, call it what you will, it’s actually just a bunch of thin white noodles made from the same konnyaku previously mentioned. Similar in texture but a little more tender on the palette due to the thin noodle shape.

Like most countries (other than America), Japan does an incredible job of utilizing every single part of the animal and not letting a single body part go to waste. Gyusuji translates to beef tendon or sinew. While gyusuji has a rubbery texture that might be off putting to some, others adore this mini skewer full of beefy flavor.

Another oden staple is chikuwa, a tube-shaped fish cake. Chikuwa come lightly fried or plain. The texture is similar to a firm tofu but slightly more spongey, which is what makes it the perfect oden ingredient.

Atsu age is perhaps the most common tofu based oden ingredient you’ll find. All it is is thick deep fried slices of tofu. Thick enough where the inside of the tofu remains solid, but the puffy fried skin is perfect for soaking up the dashi.

Ganmodoki is a deep fried tofu patty with veggies mixed in. This one is quite straightforward really…fishy, fried, fabulously delicious.

Yes, mochiiri kinchaku is a pouch made of, you guessed it, fried tofu. But this little tofu purse has mochi (a sticky rice cake) nestled inside. A little on the heavier side because of the dense mochi, you’ll probably just want one of these so you can fill up on all the other choices.

A snow white, fluffy, triangle (or round) fish cake that reminds you of a Mr. Clean sponge. It’s actually a white fish paste mixed with nagaimo (Japanese mountain yam) which is what gives it it’s light and fluffy texture. Easy to spot and easy to eat for first timers.

So get ready to huddle up around the nearest yatai in front of a simmering pot of oden, drink sake, and indulge in each and every bowl one morsel at a time.

One last note, if you love heart-warming, soulful stories and comfort food as much as I do…then check out these two Japanese TV series found on Netflix (one of which has an episode featuring oden)! Samurai Gourmet and Midnight Diner!