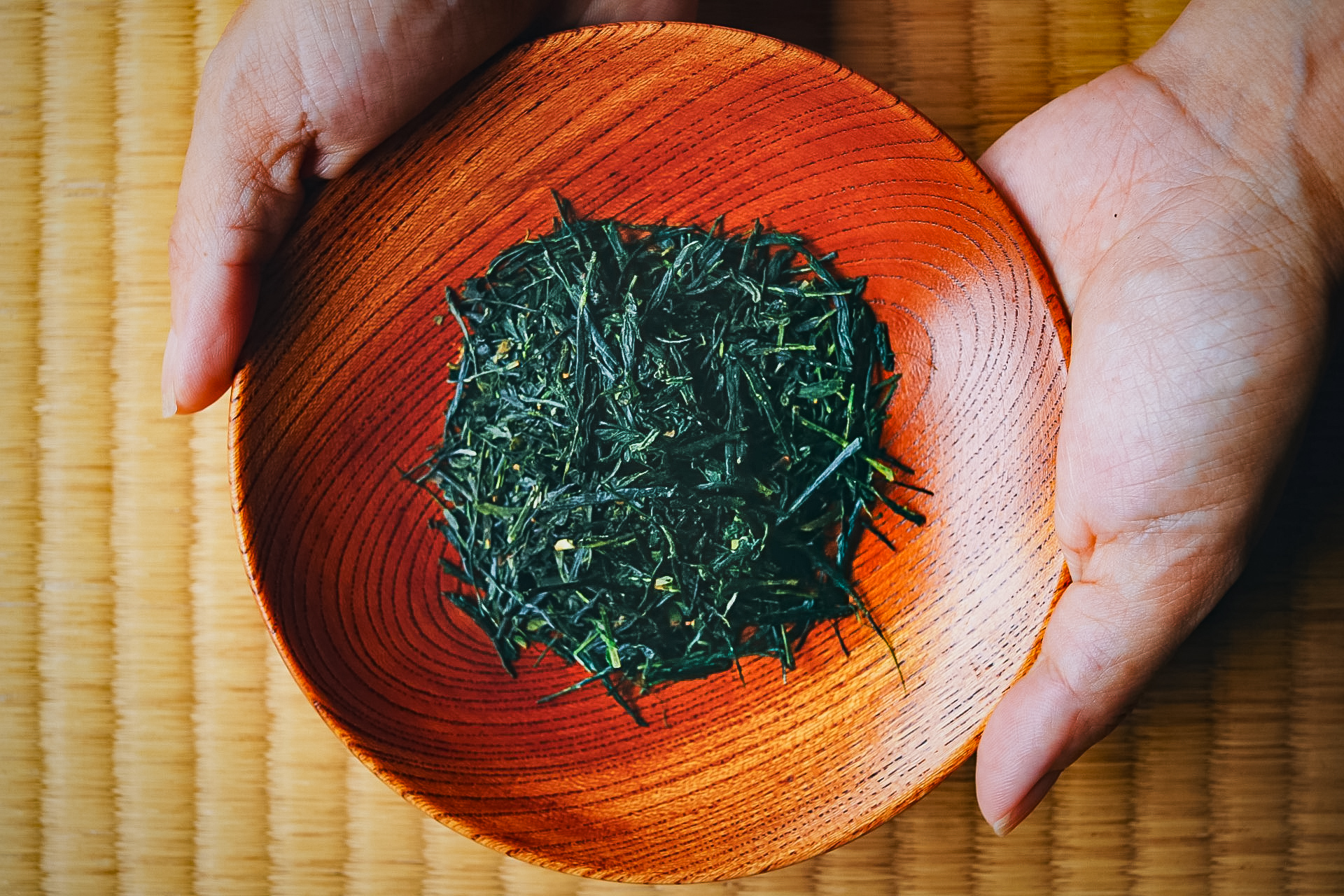 One bullet train from Tokyo Station, two locomotives, and one windy bus ride later, I find myself 40 kilometers southeast of Japan’s ancient city of Kyoto, in the remote town of Wazuka. What brings me to live in a town of fewer than 3,600 people and a single karaoke bar? The answer is simple and delicious, tea. For three months, I sipped, studied, and steeped myself into the world Japanese tea while living on Kyoto Obubu Tea Farms.

Wazuka prides itself on preserving the tradition of making tea and with over 300 families dedicated to making this iconic beverage, the town drinks, eats, breathes and dreams of tea. Hundreds of tea fields line the river up into the mountains surrounded by mist filled valleys. It’s well into fall, the last harvest of the year, and the town is scattered with dozens of trees dotted with vibrant orange bulbs of juicy kaki (persimmons) and electric yellow spheres of lip-puckering yuzu (Japanese citrus). You can hear harvesting machines buzz through the air as farmers work in pairs to harvest tea from trees meticulously planted by their ancestors generations ago. 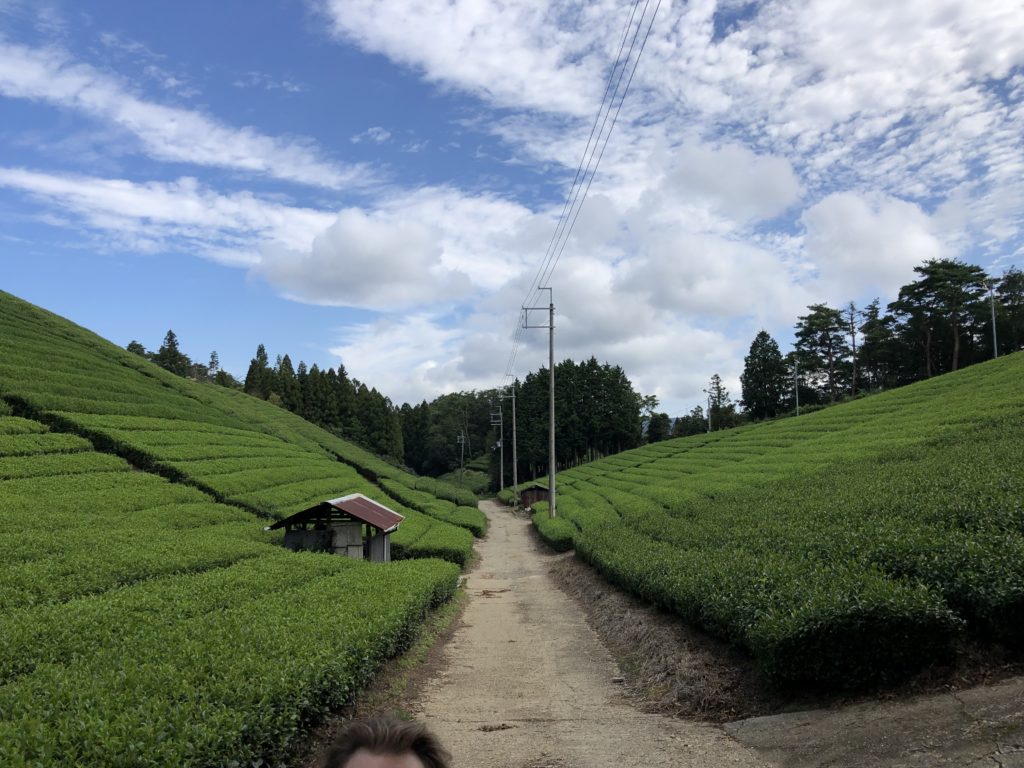 Tea’s origins in Japan date back to early Nara (710-794) and Heian Period (794-1185) when it was introduced several times in different forms by Buddhist monks returning from China. Japanese green tea as it is known today first appeared in the Kamakura Period (1185-1333) when Eisai, the founder of the Rinzai sect of Buddhism, brought back a new tea seed to Japan. In the thirteenth century, Eisai gave tea seeds to a fellow monk who planted the seeds in the region of Uji. This became the birthplace of tea in Japan and established a world-renown tea-producing region.

As tea production spread, a wide variety of processing methods developed. It wasn’t until about 280 years ago, that sencha (Japan’s most well-known green tea) was invented by Soen Nagatani in Ujitawara, a city neighboring Wazuka. Tea producing methods and styles traveled quickly and since then, Wazuka has traditionally been a sencha producing area. By the nineteenth century, tea production expanded and different regions began shipping their tea to sell in the capital of Edo (now Tokyo) to trade with foreign countries.

Until the end of the Edo Period (1603-1868), tea was grown in Japan’s mountainous regions. From the early Meiji period (1868-1912) expansive areas of flat land were transformed into large tea plantations in regions such as Kagoshima and Shizuoka. The formation of large tea plantations also meant the development of distribution systems, tea merchants, intermediary traders, tea wholesalers, as well as processing technology.

Today, the lifestyles of the modern Japanese have changed substantially and so has the tea industry. To meet the demand of the Japanese market, a Japanese tea conglomerate developed a ready-to-drink tea, something deemed previously unimaginable. Today, most people encounter tea in the form of a plastic PET bottle in the ever-popular Japanese konbini (convenience store) or state of the art vending machine. Due to the uniform flavor of PET bottle tea, for better or for worse, this flavor has widely become what people know as Japanese tea.

But we will not let the elegant packaging of a PET bottle lead us astray…the world of Japanese tea is as vast as it is deep.

While all teas come from the same plant, Camellia Sinensis, there are dozens of varieties of tea depending on the cultivation, harvesting, and processing of the plant. These factors, in combination with different brewing styles, give each tea its unique flavor and personality.

I was fortunate enough to live in Wazuka during the last harvest of the year, and for three months I had the most beautiful commute to work in the world. Everywhere I turned there was a tea field and I was never sure when one farmer’s field ended and another farmer’s field began. It’s 7 o’clock in the morning and our farmer’s assistant skillfully drives us through winding roads and maneuvers hair-pin turns in a tiny kei truck (light Japanese mini truck). We arrive at a tea field 540 meters above sea level overlooking the town. Gloves on and hats secure, we’re ready to harvest.

In Japan, commercial tea cultivation is mainly carried out in the southern half of the country which maintains temperatures and rainfall levels similar to that of a subtropical climate. Before agricultural mechanization, farmers were subject to the landscape they settled on and thus tea was grown on hills. Tea fields in older producing regions, such as Wazuka, are on hills making the mountainous landscape look as if it were covered with an emerald patchwork quilt. While other tea producing regions started in the Meiji Period, such as Shizuoka and Kagoshima, are planted on expansive flatlands transformed by modern technology creating vast tea fields as far as the eye can see.

In addition to landscapes, cultivation methods also differ depending on the kind of tea the farmer decides to make. There are two main cultivation methods, rōji (unshaded) or kabuse (shaded). In
the rōji method, tea fields grow 100% under open sunlight. In the kabuse method, tea is covered with a dark material to reduce the sunlight the tea receives by up to 85%, causing the tea plant to whip up more of an amino acid, called theanine. Theanine is responsible for the distinct umami flavor and relaxing effect in Japanese green tea. You can see the tea being shaded a few weeks just before the spring harvest. Rather than seeing green stripes on the hills, you see black stripes or black “curtains” hanging on shelves over the tea plants.

The tea plants grow between the spring to autumn seasons and remain dormant for winter. Farmers harvest the tea between two to four times per year from April to October, with each harvest period lasting anywhere between two to six weeks. The tea leaves in the spring are tender, bright green, and packed with tea components. Throughout the year, the tea leaves grow larger and thicker leaves, with fewer tea components in them as the plants grow tired and fight the heat and pests of the summer season. The tea leaves grow the largest and thickest in autumn and contain many trace elements.

Straight from the tea fields, canvas bags stacked twice the height of the truck, we make our way back to the factory and unload the leaves into giant vats for storing until we’re ready for processing in the evening. Even in the fall, the fresh leaves fill the factory with a delicate, fresh, and slightly floral aroma. At six o’clock in the evening, factory lights flicker on and processing begins.

What makes Japanese green tea unique compared to others — such as oolong and black tea — is that the leaves are not oxidized because they are steamed shortly after harvesting. The steaming process is responsible for deactivating the enzyme responsible for oxidizing the leaves, ensuring the tea retains a natural fresh fragrance and vibrant color. Depending on the season and condition of the tea, the leaves receive different amounts of steam for different lengths of time. In the spring when baby shoots are tender and small, they receive less steam for a shorter time. As the seasons progress the leaves become thicker and heartier, requiring more steam and longer steaming times. These different steaming times are classified into three general categories — futsūmushi (normal steamed), asamushi (lightly steamed), and fukamushi (deep steamed).

First, the leaves are rolled back and forth in rolling machines to remove the inner and outer moisture and break down cell walls, meanwhile hot air blows through the machines to begin to dry out the leaves. The tea leaves are then placed in a rolling and twisting machine which evenly distributes the moisture in the leaves by moving them in a circular motion over an embossed rolling board. Finally, the leaves are separated and ready to be rolled in their signature needle shape. A shaping machine rhythmically flicks the tealeaves over a bamboo covered rolling board using brushes that sweep back and forth. After shaping, the needle-like tea leaves are ready for final drying. From this process, the final product is called aracha, also known as unsorted or ‘crude tea’. 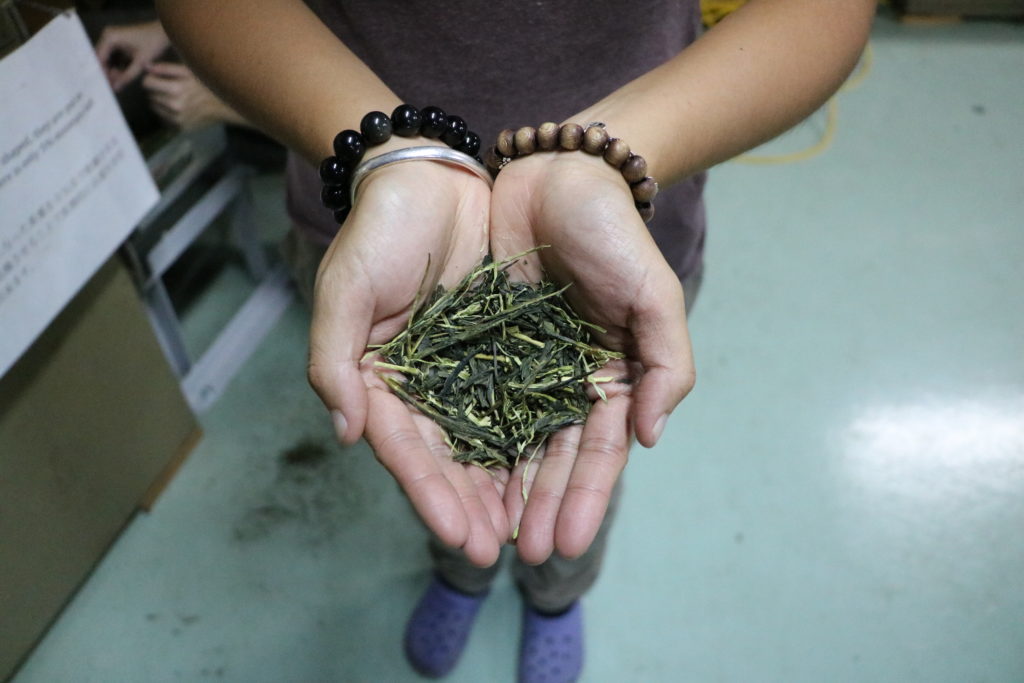 In Japan, it is common practice to sell aracha to wholesalers who purchase the tea and send it through a second process which involves sorting stems and leaves and then blending tea from different farms to reach final a product state.

Before the industrial era, the entire process except for steaming took place by hand on a single heated table covered with washi (traditional Japanese paper), called a hoiro. It is an extremely skilled art and requires six hours of backbreaking labor and expert and agile hands to turn freshly steamed leaves into beautifully thin needles of sencha. Hand-rolled tea is now a cultural heritage, and while it is not commonly practiced, the art-form is preserved throughout Japan.

While the process of making Japanese tea is rather straight forward, how it can be brewed and consumed are endless. Brewed piping hot, gently warm, cold or iced, less leaf or more leaf — Japanese tea is versatile and ready to be brewed to the drinker’s taste.

In Japan, it is industry-standard to consider sorted tea as the final product for brewing. However, aracha (unsorted tea) is beginning to make a name for itself in the big leagues. Aracha is also called ‘Farmer’s Tea’ because it is what the farmers used to keep for themselves before they sold their tea to wholesalers. Some tea farmers, like those at Kyoto Obubu Tea Farms, have adopted an unconventional approach by making aracha and sharing it directly with their customers allowing them to experience a different side of tea.

On the other hand, there is ryokucha, which is the general term for green tea and can be further categorized into different types of tea based on cultivation and processing methods. There are shaded teas with rich, sweet umami flavors like gyokuro, matcha, and kabuse sencha. Different teas are made from different parts of the plant — bancha comes from the lower leaves on the plant, kukicha is made of stems, and tencha consists of only the tea leaf. Commonly found in households and restaurants are roasted green tea and green tea mixed with toasted rice — hōjicha and genmaicha respectively.

It’s ten o’clock in the evening and the first batch of this year’s autumn sencha is out of the dryer ready to taste. Covered in sweat and a layer of tea dust sits on my hair, I walk over to the drying machine, scoop a bunch of tea into my hands and stick my nose right up to the dried leaves. The tea is still warm, emitting a grounded, cedar-like aroma from the thick stems. My colleague tosses a handful of fresh tea into an already prepared hōhin (a Japanese teapot, whose name means ‘treasure bottle’) for brewing. Ninety seconds later, I sip my first Japanese aracha. It might have been the hard work put into the harvest or the fact that I was parched after a long day of work, but it is a taste I will never forget.

If there’s one thing I learned about Japanese tea during my time in Wazuka, it is to appreciate tea in all its shapes and forms from one brew to the next, without comparison to other teas and independent of popular belief. A friend once told me, “Good tea takes time,” and if you give tea enough of it, it will surely open itself up to you.

Filed Under: The Origins, Travels
Pivot! Traveling in the times of Covid-19