There is a famous Scottish saying in Gaelic, “S mairg a ni tarcuis air biadh.” In English it translates to, “He who has contempt for food is a fool.” I couldn’t have put it any better when it comes to the Scots and their sentiment towards food.

Over thousands of years, the Scots have made the most of their environment. People form more tropical and warmer countries like myself will be thoroughly impressed at their use of natures offerings; from the rugged mountains, vast lakes, sea lochs and streams to the fertile valleys and moorlands. Not much can sustain a harsh winter in Scotland but here we are today, enjoying Scottish food that nourished the country men and women for centuries.

The Celts being one of the first major settlers in Scotland, greatly influenced the country’s food. Similar to many populations settling in the north, cattle and sheep were kept alongside basic crops of oats and barley. Beef (including the famous Aberdeen Angus), lamb and mutton, and venison came from the open lands. Wild game such as grouse, partridge and rabbit came from the highlands and the lowlands. While the lochs and ocean provided a rich supply of salmon, haddock and trout.

Then the country became heavily influenced by the Vikings in the 9th century. They introduced new cooking techniques you can see in foods today, such as smoking meat.

Though not as obvious, Scottish food has also been influenced by the French. For centuries the French were in close alliance with the Scottish, known as Auld Alliance. Especially during the 16th century when Mary, Queen of Scots, brought French chefs with her back to the Scottish Court. This led to the creation of rich sauces, cooking with herbs, as well as new food terminology.

Today Scottish cuisine is an eclectic mic of many cultures, but let’s try some of the classic dishes that perhaps more accurately depict the history of Scottish food.

Dishes meant to provide warmth, strength, and nourishment to help people endure a home in the north.

Just by the sound of it, these foods seem like a dinner for Winnie the Pooh’s Huffleumps and Weasles. But don’t be fooled! Despite their silly sounding names, these traditional Scottish foods are not for the faint of heart…or rather, faint of stomach I should say.

The most intriguing dishes are often ones that were meant to utilize every part of the animal. Usually indicating times when there was no room for waste and people maintained a deep appreciation for nature’s offerings. Haggis is made from sheep pluck (the often discarded parts such as lungs, heart, etc.). The pluck is minced, mixed with oatmeal, suet, seasonings and stuffed into the sheep’s stomach, sewn shut and cooked. Not everyone is used to eating animal innards or stomach, but if you want a true Scottish food experience, this is a must try!

Located on the easter coast of Scotland, Arbroath is a small fishing town known for their smoked haddock. Te fish is first salt dried and them smoked using a whisky barrel and beech and oak hardwood.

This dish gets its name from a small town in Northeastern Scotland, Cullen. A ‘skink’ is the Scot’s way of saying a shin, knuckle, of hough of beef and the somehow adopted the secondary meaning of a soup. Cullen Skink is a hearty soup traditionally made with smoked haddock, potatoes and onions.

Stovies are one of those dishes where there is no single recipe. Each family has their own recipe, which is of course can only be the best recipe out there. Stovie means “bits from the stove” which are all the leftover bits from a traditional Sunday Roast. If there are any left over pickings from Sunday lunch, stovies are turned into a dish mixed in with potatoes, onions, vegetables. Yet another dish intended to use leftover food.

A cheeky name for a cheeky dish. Main ingredients include…you guessed it! Potatoes, cabbage, and onions from a leftover roast meal. I’d imagine you see the pattern in Scottish comfort foods…

A hearty and sweet fruit pudding is a classic Scottish dessert typically served with clotted cream and a dram of whisky. This dessert is most often associated with Christmas and Hogmanay, it’s no wonder its a classic comfort food from the holidays. 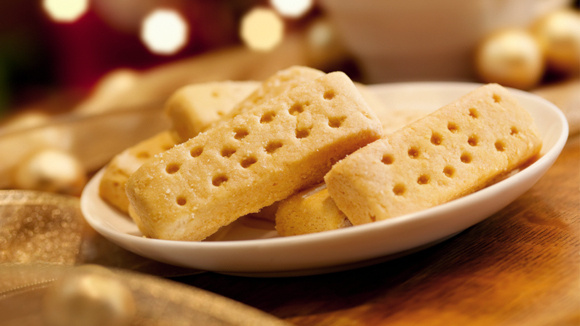 Scotland is in fact the birthplace of the famous cookie, with the first printed recipe in 1736. What better place to try the world famous buttery biscuit?

Part of a traditional Scottish breakfast, sometimes referred to as Potato scones. Tattie is in fact a familiar word for potatoes which are the heart of this tasty little treat. Quick, simple, and a useful way to use up leftover mashed potatoes!