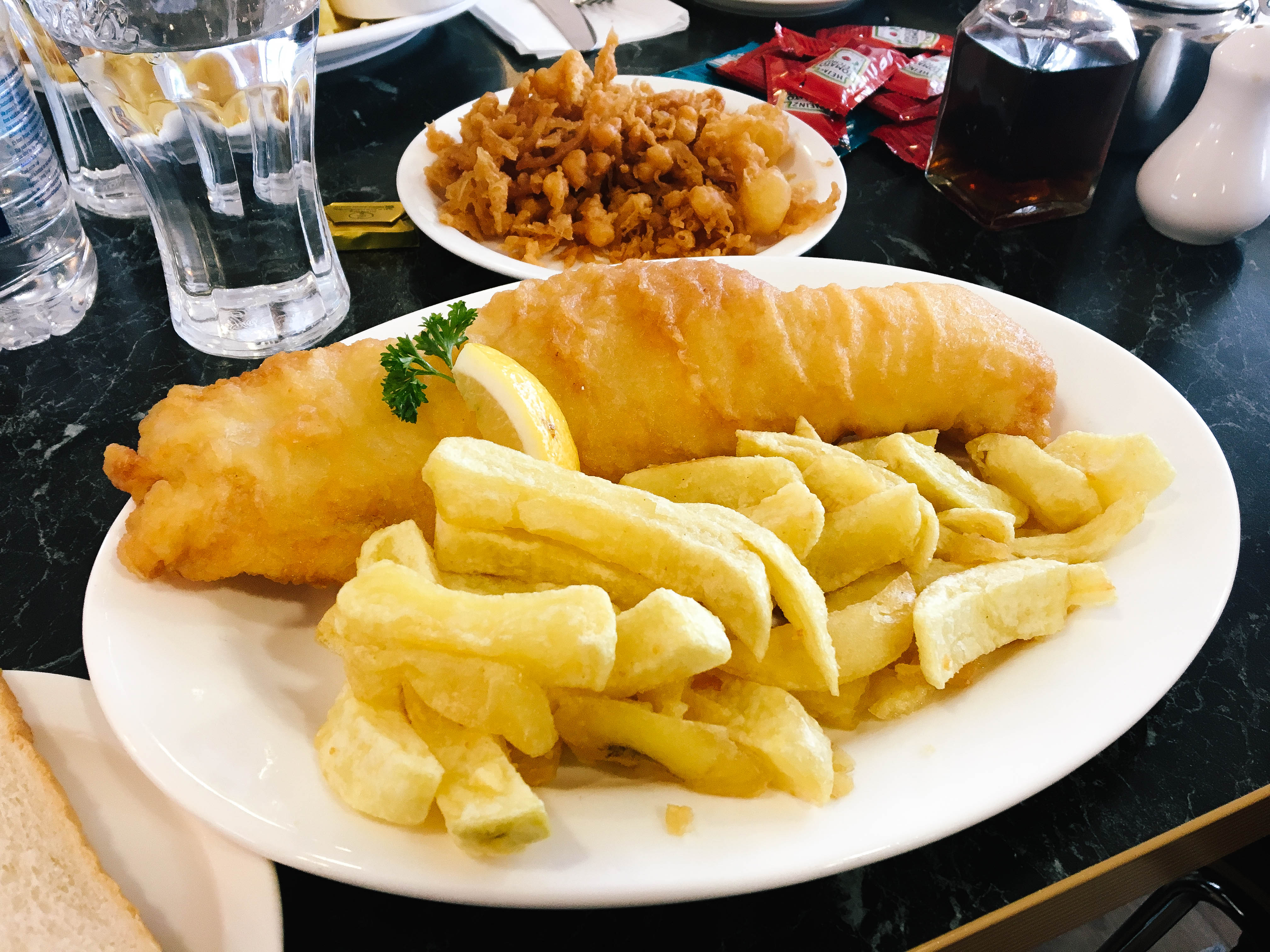 Amble England’s cobblestoned streets, cross centuries-old bridges, and wander through celebrated covered markets. Before you realize it, the morning drizzle has made room for the afternoon sun and history has unravelled before you. More than a postcard photo scene, ancient castles, royal palaces, and red double-decker buses all have convoluted histories that are deeply embedded in English traditions. Much like the history of Fish and Chips.

Synonymous with ritual and nostalgia, Fish and Chips take pride and place as Great Britain’s national dish. Freshly fried filet of fish, piping hot chips, and doused in salt and vinegar. Always takeaway and always eaten outdoors (bonus points if it’s drizzling out.) And any English citizen will tell you there is just no other way to enjoy a proper fish and chips.

But where did this iconic English comfort food come to be and how did it capture the hearts of an entire nation?

A Brief (and very obscure) History of Fish and Chips

Fish and Chips history is rather shrouded in mystery as one really knows the the origins of the dish. However, there are claims that the very first “chippie” (fish and chip shop) began in Lancashire in the North in 1863 and in London in the South of England in 1860.

But a fried potato and battered and fried piece of fish is no culinary revolutionary in the 1800s. The fried fish and cooked potatoes existed many years before either family in Manchester or London claimed to be the first. Fried fish was introduced to London by Jewish immigrants from Portugal and Spain probably as far back as the 17th century. While fried potatoes as chips are said to have originated in Belgium.

Originally, like any legitimate comfort food, fish and chip shops were small family businesses often from from the “front room” of a house and were common place by the late 19th century.

In the late 19th century and early part of the 20th century, fish and chips began to satisfy the growing population of the country. The Industrial Revolution allowed for fish to be imported and distributed from all over the North Atlantic, Iceland and Greenland on steam railways.  The development of trawl fishing in the North Sea provided unprecedented supplies of white fish and the development of the rail network connected ports to the nation’s major industrial cities.

Fish and chips continued to feed the nation through the first and second World Wars as the demand for cheap fish captured by trawler fleets actually drove further development of rail links. Prime Minister Winston Churchill even referred to fish and chips as “Good companions.”

“From humble beginnings ‘British’ fish and chips are now a global phenomenon and still growing.”

But What Makes A Good Fish and Chips?

Oddly enough, for how collective England’s love of fish and chips is, it is surely a personal ritual. Cod or haddock? Salt and vinegar? Bread and butter? Scraps? Mushy Peas? Tea and Milk? But no matter how you take your fish and chips, there are a few things you just have to look out for to have an honest experience of a nations proudest culinary combo. Let’s see what our friends at The Independent have to say after covering the National Fish and Chips Awards.

If it’s your first time eating proper fish and chips, might I suggest grabbing your best English mate and just follow their move.

It’s quite the routine.

What to look out for Rule #1: The Fish

“The fish must be firm and flaky, succulent, free of bones, not too oily, and most importantly white in color.”

But what kind of fish is best? Cod, Haddock, Pollock, or Skate? Hungry House takes a whimsically closer look at the different types:

Cod: Mostly found in the south of England and the most dominant in the South chippies (even though most cod is caught in Scottish waters). This fish is moist and plump, with a tender consistency that contrasts perfectly against a crispy batter. Soft and supple, cod has a mild fish flavor. Some say it lacks a punch, while others love the chunks for soaking up sauce or gravy.

Haddock: Typically found in the North, and as an amateur fish and chips eater I would probably hardly tell the difference. But experienced well-seasoned eaters know all to well – haddock is certainly drier and flakier than cod, and carries that “oomph” that is lacking in cod. Slightly sweeter in taste, many people do prefer haddock.

Skate: Most commonly found in chippies along the west coast of Scotland, it’s about as far from British fish and chips as it gets. Skate is flat and has ray-like features making the meat stringy, but tender, and filled with bones (contrary to Rule #1). The taste is has a mild nutty flavor that actually pairs well with lemon or tartar sauce.

Pollack: Like everything in the Westcountry, fish and chips is done differently. Pollack is a member of the cod family and is often cheaper alternative to cod. Just as juicy and tender as cod, pollack is slightly flakier and sweet in taste.

What to look out for Rule #2: The Batter

“The best batter is crispy, even-coloured, covering the whole fish, not too greasy and free of any carbon particles.”

If you’re doing it right, you’d be ordering the scraps along with your fish and chips too.

What to look out for Rule #3: The Crisps (chips)

“Crisps should be crispy on the outside, fluffy on the inside and cooked right through.” (Although my English friend Emily begs to differ and prefer soggy chips, but still always crispy batter).

What to look out for Rule #4: The Extras

Opt for bread and butter so you can make a sandwich out of your fish and chips. The bread will soak up all the juicy vinegar and fish drippings, not letting a single drop go to waste.

And as if you didn’t have enough options to customize your fish and chips – grab a cup of tea and milk to go for an all out English experience.

But other than that, you could say the English aren’t too picky about their Fish and Chips…

Filed Under: The Rituals, Travels
Tags: Batter, Bread and Butter, Cod, Fish and Chips, Haddock, Mushy Peas, Pollack, Salt and Vinegar, Skate, Tea and Milk
Makings of a Proper Sunday Roast
York: Come for the History, but what about the Food?

3 thoughts on “Fish and Chips: A Comfort Food Ritual”